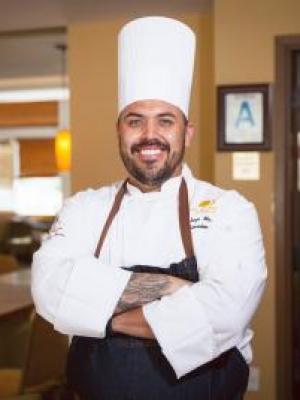 
As a young boy Chef Miranda was surrounded by family who had a love for food and it’s this love that inspired chef Miranda. His inspiration came from his father who loved to BBQ every weekend and thought him the different ways to cook meats, seafood and poultry. Soon after Chef Miranda took on his own culinary journey which took him to Costa Rica where he learned to cook traditional Costa Rican dishes from his grandmother soon after he took over his grandmothers kitchen and was named the best café in Puntaneras by the El Guilde De Cocineros; Chef Miranda took this along with everything else he had learned from his father and with their guidance he attended and graduated from the Long Beach College with a Major in culinary arts. Soon after chef Miranda took on the roll as sous chef at world renowned queen Mary luxury hotel where he was in charge of the 5 star restaurant Sir Winston’s. Soon after chef Miranda moved to the wyndham hotel a 4 diamond property in the heart of Costa Mesa where he honed his skill under the tutelage of renowned chef Ben Diaz. Chef Miranda now heads the helm of the Grand Restaurant inside the Double Tree hotel where he oversees all areas of the culinary department; with great acquired skills and a hunger to learn, chef Miranda shows no signs of slowing down.