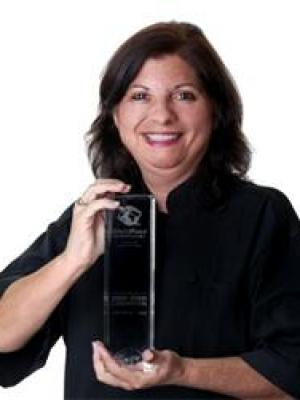 
2012 SIDE DISH CHAMPION Linda Bonwill grew up in a small Italian community in East Haven, Conn. She attributes her Italian heritage and food being a constant, ubiquitous staple throughout her life as the driving force behind her love of cooking and food. Together with her husband, Bonwill raised four children in a house that embraced food. She incorporated into their everyday activities, from picking fruit to experimenting with new recipes in the kitchen. While some people call cooking an "art," Bonwill calls it "therapy." Bonwill qualified for the World Food Championships by winning grand prize in a Just a Pinch online qualification contest. She used the same Potato Cobb Salad that would eventually be featured as one of her two dishes at the WFC Final Table. Relatively new to the competition cooking scene, Bonwill entered her first recipe contest two years ago. From there, she would go on to audition for the hit Fox cooking show "MasterChef" making it to the very last round of cuts. That experience was enough to encourage her to start her own recipe blog (worldclasscooking.blogspot.com) and push her to challenge herself and her culinary creations. She has won several cooking contests and competitions. She has also started her own gourmet chocolate business called Linda's Chocolate (lindaschocolate.com) At the World Food Championships, Bonwill's two dishes were her Cobb Potato Salad and a Creamed Broccoli Cheese Soup. The Cobb Potato Salad included her original mayonnaise-based dressing with red skin potatoes, topped with turkey, bacon, avocado, egg, tomato, bleu cheese and scallions. The Creamed Broccoli Cheese Soup had sautéed broccoli, parsnips, celery and garlic that was pureed for creaminess, add in Philadelphia® Cream Cheese, chicken broth and Kraft® Velveeta and finished off with roasted cauliflower as a garnish and drizzled with sweet chili sauce. While her recipes contain hundreds of different ingredients, her recipe for success boils down to hard work, ambition and an undying love for food. "The support I have received from family and friends has been tremendous," said Bonwill. "I especially have to give credit to Just a Pinch. Without them, I never would have had the opportunity to attend." And if you're looking to win big at the World Food Championships in 2014, keep an eye out for Linda Bonwill. She's already got her eye on this year's competition… and after besting chefs and other world-class cooks, Bonwill showed that "home cooks" are a force to be reckoned with.