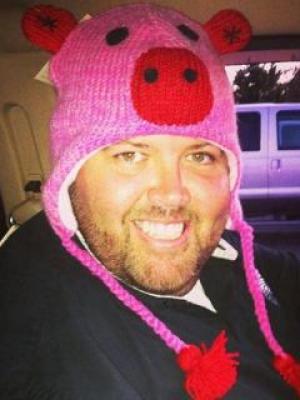 
I started cooking in KCBS BBQ contests when I was 18 years old. I am now 35 and have been cooking in a variety of contests over the last 17 years. Over the last 8 years, I have cooked mainly MBN BBQ contests. It took several years to develop a winning recipe and I am constantly trying to improve the things that I already have. I am the Pitmaster for Victory Lane BBQ. In 2013, I led Victory Lane BBQ to being Hog Team of the Year on the MBN Circuit. This year in 2014, we currently have 9 Grand Champion wins under our belt. 7 of those wins are with Shoulder and 2 are with whole hog. This year in the MBN Circuit, we will be Hog, Shoulder and Rib Team of the year! A few other interesting facts: most people recognize me from a national commercial that I was in, I played Lil Norm; I have been married to my wife, Candace, for almost 2 years now; I have a 9 year old son named Blaine; I have my own line of BBQ sauces and rubs on the market.