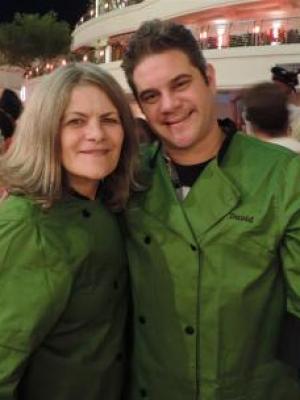 
Merry Graham is a wife, mother, grandmother, published author, award-winning home cook and all around Foodie! In 2012, Aetna and Bobby Flay crowned her The Healthiest Cook in America! In 2013, Merry was awarded $25,000 in The Chocolate Adventure recipe contest by Scharffen Berger Chocolates. In 2014, Rachael Ray said, “Merry has a sweet soul”, as she competed on The Rachael Ray Show in The Great American Cookbook Competition. Merry is coming up on her 5th year of competition and has won over $75,000 in cash and more than 15 trips. Merry can often be found in her Southern California kitchen creating an amazing new recipe or whipping up a delicious meal. She has a passion for food and enjoys volunteering her cooking services for a variety of venues and traveling the world for cook-offs and food festivals. After 20 years of educating four children at home, founding home school support groups, directing various women’s ministries, running a swim school, writing and publishing two scripture reference books, and other creative endeavors, Merry enjoys her new artistic expression: competitive cooking. “It is my time to fly, and I am having a blast”, says Merry. “Creating tantalizing food is an art form! I don’t knit, crochet or sew a very good quilt. I have never written a song nor sung in tune. I can’t even draw or paint a picture. My art studio is my kitchen! It is there my art mediums await me: spices, fresh produce, lean meats, and other intriguing ingredients. I love to play, create, and develop culinary masterpieces, or at least marvelous munchies! I work feverishly in the kitchen developing new recipes and perfecting old ones. Presenting a vibrant tantalizing dish to friends, families, and judges is my way to truly bless that person with a feast for their eyes, soul, and tummy!” Merry has competed in the World Food Championships and encouraged other home cooks to enter since WFC began in 2012. Last year, Merry competed with her son, David Graham in the sandwich category. David works in politics in San Diego, CA. Watch out for Graham Slam Sandwiches in the sandwich category! They are determined to make it to the top ten!