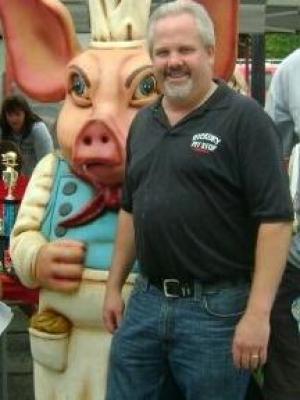 
Since serving its first customer in 1957, the Hickory Pit Stop (originally known as Jim & Joe's) has become a Bar-B-Q landmark for generations of Evansville, Indiana residents and visitors alike. Our pit master, Jeff Ellison is the 3rd generation now operating the family business. Jeff, along with his wife Tammy formed the current competition team in 1999. The current team consists of Jeff & Tammy Ellison, their son Cameron, Greg Newton, Randy Morphew, Bob Hyde, along with other family members & close friends from time to time. Since their formation in 1999, the BBQ team has steadily collected numerous awards in sanctioned & non-sanctioned events. Some of their most coveted awards include: 2011 Grand Champion in the Queen City BBQ Competition to benefit the Wounded Warriors Fund; 2011 Grand Champion-Gilda’s Club BBQ Competion; 2004 Pass Down Grand Champion-Smoke on the Water competition in Evansville, IN; 2000 Winner of the Indiana State Championship BBQ Sauce Competition; 2005-12th in the World at Memphis in May for People’s Choice BBQ, and of course our most recent win in the Destination Bacon Domination competition in Munfordville, KY that secured our Golden Ticket into the World Food Championships. The Hickory Pit Stop BBQ Team members are strong believers in faith, family, community, and our country. When the team is not experimenting and coming up with new culinary delights, the team can often be found donating their time and talents by participating in and/or hosting local fundraisers to benefit individuals in need of medical treatment, local law enforcement, St. Theresa Parish & School, the Tri-State MS Society, the Otters Frontier League Baseball Team, and our Nation’s military.