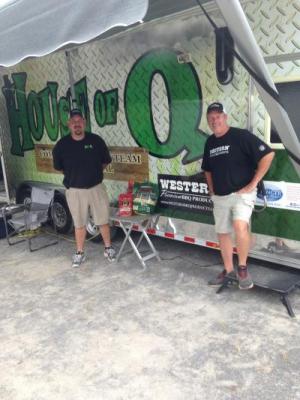 
House fo Q 12 time Grand Champion with Pitmaster John Coon and Russ Lannom have a lifetime of cooking for fun but began competitive cooking in 2004. Entering the first sanctioned contest was an addicting ride and through the years the House of Q has progressed into one of the top ranking KCBS Teams. Meeting each other at a contest in Nashville,Tennessee in 2009, Russ Lannom of Masters BBQ immediately sparked a friendship that led to the addition to the House of Q in the 2012 season. Our combined passion is to compete vigorously week after week to elevate the House of Q to the top honor of TEAM OF THE YEAR from the Kansas City BBQ Society. We also strive to take on any challenge that comes our way . We coin the phrase “BBQ UP” for our team is so blessed with all the accomplishments that have come our way through the years.