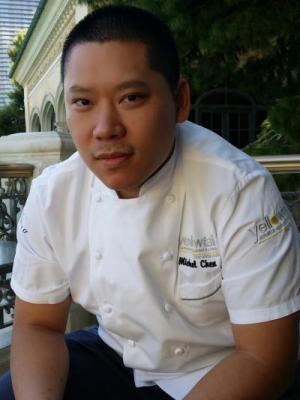 
Michael Chen | Chef de Cuisine | Yellowtail Japanese Restaurant and Lounge, Chef Akira Back Michael Chen's background and experience is a true cultural melting pot. The Taiwanese born, San Francisco raised, American inspired chef found cooking in his families' restaurant as a positive outlet in his earlier years. "It was a way for me to channel my energy in to something positive and to keep me off the streets and out of trouble." He attended The Culinary Institute of America after high school and graduated in 2002 with a Bachelor's Degree in Culinary Arts Management. Since then, he has worked under some of the top chefs in the country such as Ming Tsai, Michael Mina, and Eiji Takase, just to name a few. His personal career highlight came in 2005 when he took a position as Chef de Partie at the only three star Michelin restaurant in Las Vegas, Joel Robuchon at the Mansion. There he executed signature tasting menus and modern French cuisine, under the direction of the legendary French chef. Prior to his position at Yellowtail, Michael was Sous Chef at Shibuya, the chic Japanese eatery at the MGM Grand in Las Vegas. He appeared on the Food Network's reality cooking competition show "Chopped" in July of 2012. He is also an active member of the American Culinary Federation's Las Vegas chapter.