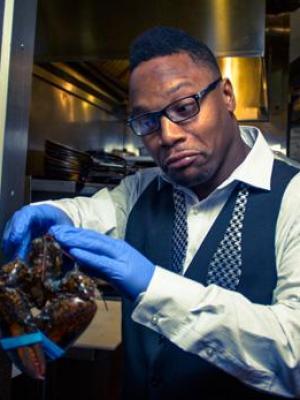 
Hip-hop deejay. Graffiti artist. Physical trainer. Empanada roller at the famous Casa Nueva in Athens. These were enlightening stops along Marcus Meacham's winding path to becoming a transformative chef at Bodega. Brainy, brawny, creative and deliberate, Meacham explained that he arrived at Bodega early this year with the goal that "the food would move to the forefront" at a place previously better known for its good times and great beer. Leaning over a thick black folder kept close by to capture bursts of inspiration, Meacham pointed to his original outline for the delicious snack that sat before us. It was that Belgian classic of mussels & fries, but enriched with a twist. Meacham described it thusly: "Everyone loves blue cheese with bacon; [chuckling] I call these Midwestern Moules et Frites." A fan of molecular gastronomy guru Ferran Adria, Meacham has assembled "cold-smoked Lobster Rolls" as a special and plans to introduce Bodega's diners to more of the ultra-modernist cuisine's high-tech delights, such as "balsamic pearls" in salads and "gellified sangria" in desserts. "I have full creative control in the kitchen and I like pushing boundaries," he said. What else new and exciting might we soon taste? An intriguing Sunday brunch is taking shape, and the seafood-loving Meacham said he'd love to play around with sea urchin, plus he's already been working up "weekly cuisine theme specials" with playful titles like "upscale Mexican fusion." Marcus Meacham is a self-taught culinary guru who has worked under many local chefs during the past few years in Columbus. His unique style has most recently breathed new life into the menu at Bodega where Ahi Tuna Burritos, Fresh Duxbury Mussels and Bombay Burgers are surprising both old and new guests alike. Chef Marcus Meacham says goodbye to a lobster. Photo by Chris Walker Photography. Name: Marcus Andrew Meacham Age: 31 Current Job: Executive Chef, Creative Culinary Mastermind Bodega Can you tell us about your training/educational experience? No formal training other than the privilege to work under some great chefs during my growing process. Can you tell us about your professional kitchen experience? I ran a sorority house kitchen for a while while I was in school at OU. I was the Executive Chef at Barrio located Downtown, J.Liu in Dublin, and Vonn Jazz in Worthington. I worked at Latitude 41 with my buddy Dave and did private kosher catering events with the amazing Lauren Birdie. What is your favorite cuisine to cook? Imaginative Cuisine. (That’s my story and I’m sticking to it.) Anything with bold and creative flavors. For instance, this week I did Sea Urchin Roe Pasta with Squid Ink Oil and Finger Lime Segments (they are like natural pop rocks blended with lemon heads, awesome). Its a cool combination of creamy, smooth, bright, and earthy. It seems like a lot to comprehend but when you taste it you know whats up. What is your favorite cuisine to eat? Anything that puts a smile on my face at that moment. What one kitchen utensil/tool could you never live without? A pen. It sounds silly, but if I don’t write down my ideas they are gone for good. I feel like I’ve forgotten more dishes then what some people around me have created. What’s your favorite cookbook? Right now, Volt Ink. When I read it at home I catch myself saying ”Oh, Damn!” out loud a lot. What is your favorite Columbus restaurant (besides your own)? I’m a big fan of Commonwealth Sandwich Bar , Ray Ray’s Hog Pit, and Molly and Joe’s. Who are your inspirational figures in the culinary world? Ferran Adria for his reckless abandonment for creativity and what is “allowed” in the culinary world. Marcus Samuelsson for his drive towards perfection and his cool ass name. Bryan and Michael Voltaggio just for being flat out culinary artists. And Jeff Henderson for his crazy strong will to succeed. No Matter What! What is your dream job? Coconut water tester in Hawaii. You asked!