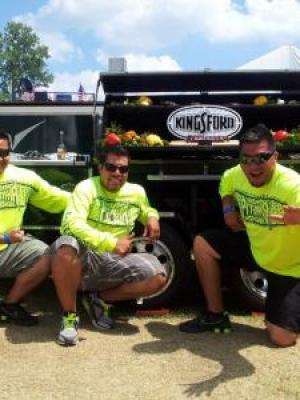 
The members of Pitmaker - BBQ Addiction competition BBQ Team are Victor Howard, Julio Howard, and George Shore. The three have been competing in the area of competitive BBQ for over 10 years, under several different cooking team names, and even against each other for fun. The main reason we compete is for fun, but also because we build custom BBQ Trailers and Pits under our company Pitmaker. We feel that competition BBQ is the ultimate proving ground for our products. It is the best way to refine our products and foster innovation, to see what works and what doesn't and to incorporate new ideas into successive generations of our BBQ Pits. It is also a great way to know and interact with our customer base. We have competed in the largest BBQ Cook-offs in the world, including the American Royal (1st Place Ribs - 2011), Houston Rodeo World Championship BBQ Cook-off (1st Place Brisket - 2010), San Antonio Rodeo BBQ Cook-off (300 teams - 1st Place Brisket 2010, 2012, and Runner Up Brisket 2013), the Memphis in May World Championship BBQ Cook-off, and numerous others. We also throw 10 hardcore NFL Tailgate parties a year at the Houston Texans stadium.