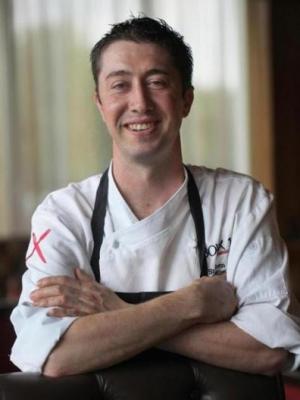 
STEPHEN COE Executive Chef A Massachusetts native now with over 25 years of restaurant industry experience, Stephen Coe was born into the culinary world and was filling doughnuts at his grandfather’s shop by the age of eight. Coe’s passion was quickly realized and he was soon competing on the junior culinary circuit with some of the nation’s most talented prospects. Coe’s dedication and finesse landed him at the elite Johnson & Wales University (Providence, RI) and by 2000, he had graduated with a Bachelors Degree in Culinary Arts, Pastry Arts and Nutrition and an Associates Degree in Business Management for Hotel Restaurants. Upon graduating, Coe brought his near-perfect GPA to The Country Club (Brookline, MA) where he delved further into his budding career doubling as the banquet sous chef and a la carte chef de cuisine. After four years, Coe assumed the position of pastry chef and sous chef at the seasonal five-star, five-diamond Topper’s at the Wauwinet (Nantucket, MA), a Relais Chateau Luxury Resort. During the off season, Coe was employed as private chef for The Chef’s Table (Pembroke, MA) where he was responsible for a myriad of tasks including menu development, servicing a celebrity clientele and business administration. In 2008, Coe first became part of the award winning steakhouse, BOKX 109 American Prime at Hotel Indigo (Newton, MA), as the sous chef where he was an integral part of the seasonal menu development and nightly execution. Coe left BOKX 109 American Prime to open a 22 acre non-profit training and research bee farm, Hollow Tree Farm (Plymouth, MA). Coe has also held Executive Chef positions at Alba (Quincy, MA) and Executive Sous at The Martini House in Napa Valley . Just prior to returning to BOKX 109 American Prime as executive chef in August of 2012, Coe took the food truck world by storm serving as a consultant for Food Truck Nation. Coe was responsible for conceptualizing and overseeing four trucks and three culinary concepts including Italian Street Food, Lobsta Love and two Grilled Cheese Nations. To date, Coe has worked proudly in 143 restaurant lines and credits stints in France Italy, Thailand and California as major inspirations for his aggressive style of cooking and his intricate technique. At BOKX 109 American Prime, Coe executes dishes that utilize the best quality ingredients and flavors in this steakhouse atmosphere, specializing in surf, turf and farm-fresh fare. Stephen Coe currently resides in Plymouth, MA, with his wife and their three children.