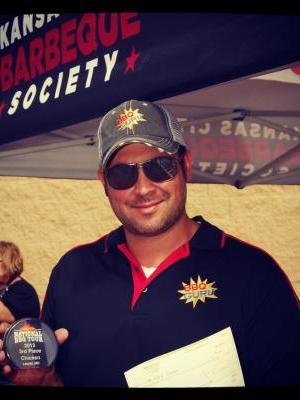 
My name is Bob Trudnak and I am a competitive BBQ cook. I have been cooking since I was 7 years old. Always standing on a chair at the counter waiting to help prepare anything I could get my hands on. I am not a chef by trade but my passion is cooking. I eat, sleep and breath fire and smoke. I started a BBQ competition team for the company I work for (The BBQ Guru) in 2005. I started with a single cook-off the first year and I now have a dozen I my schedule every season. 2010 was the year we brought things to a new level. We won the Chesapeake Jubilee in Virginia and that allowed us to cook in the Jack Daniel's World Championship that October. We placed 2nd in the world that day and earned the title of Reserve Grand Champion. We missed winning it by less than 2 points. I have continued to win state championships in Maryland and Pennsylvania as well. My goal is to take the Grand at "The Jack" one day.