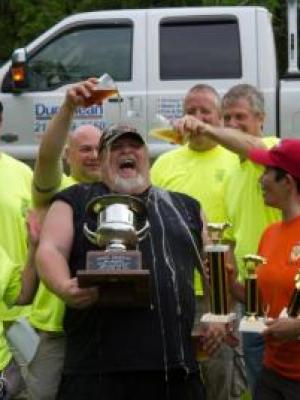 
Philly Blind Pig BBQ Tom Bera - Pit Master Marie Moody - Presentation Jeff Bera - Webmaster How it all started: In 2005 a good friend asked me to come cook ribs at a charity rib cook-off organized by Phillies great, Garry Maddox—you know, The Secretary of Defense. I always loved to cook but this was the first time cooking “real barbeque.” I bought a $25 Brinkman smoker, the little R2D2-looking thing with no airflow control, and competed in this competition. I remember watching competitors arriving with their huge smokers in tow and thinking, “we don’t have a chance.” Well, we ended up finishing in the top 5 out of a field of over 40! There were three rounds and we ran out of ribs to turn in to the judges when we were called in the top 5. It felt so good to do that well, the competitive juices were flowing, I was hooked. The continuing journey: In 2007 we got our first big win finishing Reserve Grand Champion at the New Jersey State BBQ Championship in Wildwood, NJ. Also scoring 1st place ribs and 3rd place brisket! In 2010 we were featured on FYI Philly, 6abc, and appeared live on their 4th of July show in front of the Philadelphia Art Museum. In 2012 we were 2nd place Team of the Year for Pork in the Mid Atlantic Region, having won three 1st place finishes in pork that season! Today: We continue to proudly represent Philadelphia, PA as we gain recognition in the competition BBQ world. We took our 1st Grand Champion finish at the 2013 Smoke in the Valley in Green Lane, PA. We may have won many trophies over the years but seeing someone smile after biting one of our ribs is the best award of all! Please watch the trailer to "American Smoke", a BBQ documentary coming out this October. We will be featured! http://player.vimeo.com/video/47271113 Cheers, Tom Bera www.PhillyBlindPig.com www.FaceBook.com/PhillyBlindPigBBQ