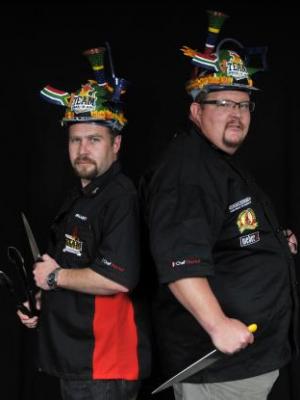 
Team Chesanyama Braai-B-Que is headed up by Borries winner "Bring & Braai" Competition in South Arica partnered by "Braaiboy" It has been our dream for some time time to have South Africa represented on the international stage. Braai is the word we use in South Africa for cooking over fire / coals and forms part of our culture. Borries has been in the food industry since the age of 15, studied at Wits Hotel School and then went on to work as Chef in the UK for two years working in some of the finest and restaurants in that time. Worked for Unilever South Africa as Regional Chef and then started his own venture in manufacturing sauces. Since 2005 he has been in a family business with his focus on managing 2 Guest Houses in Johannesburg. Braaiboy (Gareth Daniell) It all started on 17 April 2009. A few days before that we were around a braai and, as usual, someone made a comment about how great it is to be able to braai whenever we want. Equally usual, someone piped up that they'd be happy to braai every day if they could. Now, my friends and I (as I am sure is the case with many other South Africans) have often solved the world's problems around a braai after a few beers. We've come up with weird and wonderful inventions, and some truly inspired (and some equally stupid) ideas have been born around these fires... and BraaiBoy is one of them (wonderful that is, not stupid). I remember I had to leave town on business for a few days, but vowed that I would take up the challenge of braaing every day for a year as soon as I got back. True as nuts, when I got back home on the 17th, I started braaing and have continued to do so every day since.