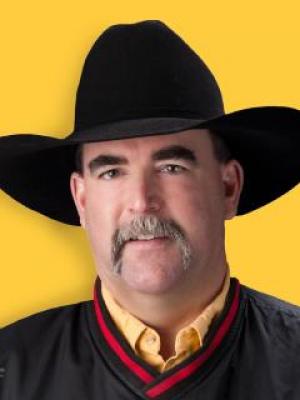 
Kelly Wertz 4 Legs Up BBQ BBQ World Champions Kelly’s hobby of cooking and BBQ eventually turned into a successful competition BBQ team; and for 8 years a successful BBQ and Steakhouse restaurant. Kelly and Roni Wertz owned and operated 4 Legs Up BBQ & Steakhouse in Great Bend, KS; a very popular BBQ stop for lunch and dinner as well as wood fire grilled steaks in the evenings and Award Winning Prime Rib on Fridays. In fact their Prime Rib is so famous that it is featured in Paul Kirks book: America’s Best BBQ; 100 Recipes from America’s Best Smokehouses, Pits, Shacks, Rib Joints, Roadhouses and Restaurants. Kelly’s BBQ Team – 4 Legs Up BBQ is one of the most successful BBQ teams on the Professional BBQ competition circuit in the last several years. Kelly cooks as a one person team but enjoys the contests where he gets to take his whole family – wife Roni, son Keelan, and daughter Kelsi. Without the support of God and his family, none of his success would be possible. • 4 Legs Up BBQ Team is the BBQ World Champion by having won the Jack Daniels World Invitational BBQ Championship • 28 Grand Championships • 17 Reserve Championships • 104 top ten finishes • 58 -1st place category finishes • Competed in 12 different states in the US and have won contests in each state • Each year since 2007, 4 Legs Up BBQ has finished in the top 15 out of over 4500 teams in the Kansas City BBQ Society Team of the Year Points. • Kelly’s BBQ sauce has won the American Royal Best Sauce on the Planet. • Kelly’s other 4 sauces and 3 rubs have won several awards at sauce and rub contest across the US. • The only team to have won both the Frisco, CO and Dillon, CO contests in the same year. • The only team to have won Dodge City, KS contest 3 times out of 4 years, and were Reserve Champion the 4th year. • Kelly travels over 50,000 miles a year competing, teaching and promoting BBQ. • The only team to have won the Jack Daniels World Invitational BBQ Championship on his own home built cooker. • The only team currently cooking on the Professional BBQ Circuit on a cooker of his own design and build. Since 2009 Kelly has taught over 500 people how to develop their own BBQ and grilling talents either for their own backyard use for their family and friends or how to win professional BBQ contests.