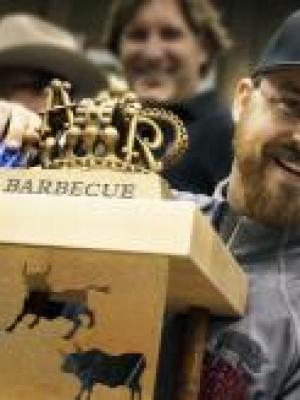 
Pitmaster for the Burnt Finger BBQ competitive cooking team, Jason Day is the mastermind behind the now world famous Bacon Explosion. Sporting it's iconic basket-weaved bacon exterior, the Bacon Explosion has received features by the New York Times, Fox News, CNN, Good Morning America, TODAY Show, Cooking Channel, and is considered to be the most downloaded recipe of all time. He also runs a successful barbecue mail order business at www.bbqaddicts.com. In 2010 Jason co-authored his first cookbook "BBQ Makes Everything Better", which was named the Best Barbecue Book in the World at the 2010 Gourmand World Cookbook Awards in Paris, France. You can follow Jason on Twitter and Instagram via the handle @BBQAddictsJason.