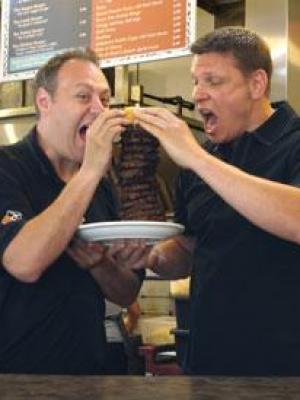 
Gerald Tritt started out in the business like most people, as a busboy. After working his way through university, he joined the Swiss restaurant group Movenpick as an Assistant Manager. Three years of Movenpick boot camp taught him the value of making sure you had a happy customer, his appetite, taught him that the food better be delicious! Upon moving to Vancouver Gerald spent time at a Vancouver institution, Joe Fortes. Gerald bought Vera's Burger Shack in 2000 and literally flipped burgers on the beach while he hatched the plan of better burger dominance in the Lower Mainland. Noah Cantor played 12 season in the Canadian Football League, and when he wasn't sacking quarterbacks and winning 4 grey cup rings, he was eating Vera's Burgers. Introduced by their wives, it was a perfect fit, Noah wanted something after football, and Gerald wanted someone that shared his passion for food. Noah, comes by it honestly, his family runs one of the busiest butcher shops in Eastern Canada, he is no stranger to hauling sides of beef around!!