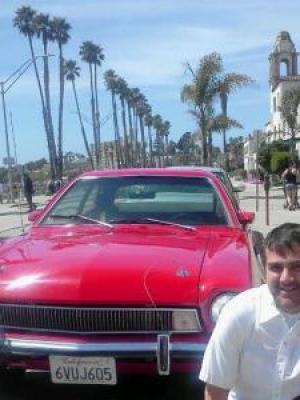 
My name is Dany Pena. I am honored to be invited to participate in this world class event. My passion from cooking begins at age five, from watching my mother making us her aromatic, yet simplistic dishes. Just the two of us. She worked two jobs and to support us and at nine years old I began to give back and helping cook HER meals after she worked all day between both jobs. At age fifteen I began working in a local Italian restaurant. I began at the bottom as a dishwasher and eventually worked my way up to a prep cook, then a pizza cook. Tragedy struck inn 1997 when I was 16 years old, and my mother passed away expectantly.Her dying wish was that I attend college and pursue a better life. And unfortunately I lost my passion for cooking after my mothers passing. So, at 20 years old I took off for Santa Cruz, California. I began attending Cabrillo Community College to fulfill my mothers last wishes of me. I started taking generals, and just for fun I took a culinary class to have a creative outlet. This single class made my senses awaken again and remembered how much I loved cooking. I decided right then and there this is what I am supposed to do. After declaring my major to be Culinary Arts and Hospitality Management, I had the opportunity of working in O'mei, a local Chinese restaurant in under an incredible chef. He taught and expanded my knife skills.I worked my way from a prep cook to a full time line cook. I also learned the unique pallet that came along with Chinese cuisine. After O'mei, I pursued an opportunity as a head line cook at Linwoods, in the Chaminade Resort. During this time, I graduated from Cabrillo. Since Linwoods was a fine dining restaurant, I was able to expand my horizons in the culinary world even further into fine dining and local California cuisine. After the season ended at Linwoods, I began as a sous chef at Peachwoods in Scotts Valley, a neighboring city. Currently, I am the head chef at South Beach Pizza Co. in Santa Cruz. We serve mouth watering pizzas on home made dough with fresh ingredients. When I first came here, everything was frozen, pre-made or fried. I created a whole new menu with new recipes that were my own. Since I came through the doors, we have had more business. Servers and bartenders that have been waiting here for years have seen the change in business and more locals are coming here. I feel proud knowing everyday that this huge turn around is because of me. During my time at Cabrillo, I was introduced to competitions. Using my recipes we won numerous competitions and if we did not win, we were always in the top three. I really enjoy competing and it is how I define myself as a chef. Everything from the traveling, the prepping, the stress and the actual cooking, gives me this incredible surge of energy that I have never felt in anything else before. This feeling is how I know this is what I am meant to do. I love what I do, and it all started standing on a chair watching my mother cook for us. Just the two of us. Always.