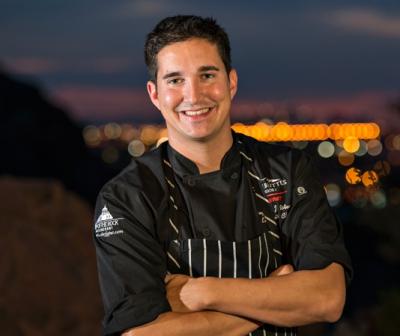 Top of the Rock

Gregory Wiener is the Executive Chef & Director of Restaurants at The Buttes Marriott Resort. He oversees all culinary operations at the resort including the signature restaurant,
Chef Wiener joined the Buttes from The Boulders Resort & Golden Door Spa in Carefree, AZ where he held the title of Executive Sous Chef overseeing all culinary operations of the Resort including three restaurants, a bakery, catering facilities, and two bars. Prior to the Boulders Chef Greg was at the JW Marriott Desert Springs-Palm Springs, California where he held the position of Chef de Cuisine and later Senior Sous Chef Tournant for three years overseeing the fine dining restaurant, Ristorante Tuscany, as well as the other dining facilities on property. Earlier, Chef Greg was Chef de Partie for Aquavit, a restaurant in Minneapolis Minnesota and New York which has garnered much national acclaim.