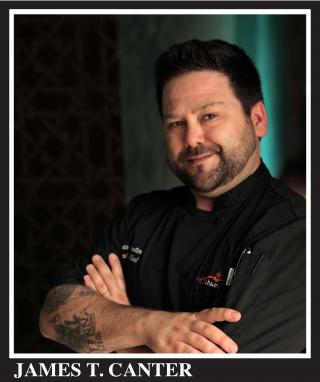 Executive Chef James Canter was classically trained in the Tampa Bay area, and went on to broaden his culinary perspective on the national circuit culminating in twenty plus years of professional experience and extensive knowledge in global cuisine. James recently relocated from the San Francisco and the Tampa Bay area’s where he worked with local fishermen, farmers, and ranchers to provide local sustainable products for his clientele at many diverse venue’s from coast to coast. Now James’ efforts are to provide the City of Victoria with the same sensible cuisine at Victoria country club where he will be manning the helm to showcase his “country club cuisine cuisine with a conscience”. James has also been the Executive Chef for the St. Petersburg Museum Of Fine Arts as well as being the Chef/owner of San Francisco’s exclusive organic South American Pena. He is also filming an “edutainment” type cooking show for T.V. as well as looking forward to connecting the community with their local food sources and bringing “sustainability” to the forefront of the Alhambra concept. Some of Chef Canter’s other accolades include two and half stars “Best Places of Northern California”, 2008 best new restaurant Tampa bay area, Gold medal-Sous Chef ACF hot foods competition, most sophisticated lunches, St. Petersburg Times, and he has had the honor of leading up the culinary team for Vice President Dick Cheney (Big Horn River Resort) and many other dignitaries and celebrities. Chef Canter has also been bestowed the honor of 2nd and 3rd place "RGV Iron Chef" and 1st place international "Iron Chef" paella and 1st place “King of Paella” (Culinary Institutes of America, San Antonio) and “Best in show” at Paella lovers united, as well as being awarded "Top 100 Texas restaurants, Texas Monthly Magazine" for his past projects. Chef Canter has come to the Victoria to pursue and achieve his passion of defining his “Food Truck Cuisine” and providing assistance to the local Victoria farmers markets. James is also a founding captain of the RGV Farmers Market Alliance which helps in educating the local community as to the benefits of choosing the agricultural bounty that is available locally and demonstrates on how to use these products. He currently resides in Victoria, Texas with his wife and three sons and is very happy to be here so that he can provide leadership and support for local culinary endeavors.