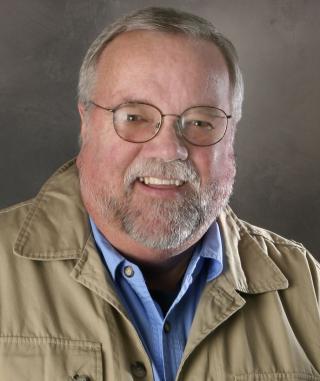 Have written more than a dozen barbecue and grilling cookbooks, but wanted to try my hand at desserts which are my weakest culinary endeavor. Have always had a sweet tooth, but never really learned to bake properly, but am trying to learn the exactness of baking. In BBQ nothing is exact. Wrote "A Century of Restaurants" a book on the oldest restaurants in America (pub. in 2013) which I produced by flying and driving over 46,000 miles around the country visiting 100 of America's most historic restaurants in 45 states - all restaurants between 100-300 years old. The one contest on TV I competed in was the Chopped Grill Masters show last year, where the crew lovingly referred to me as "Grandpa Griller." Love to cook, love to eat, love to visit small family-owned restaurants, bakeries and cafe's.
For seven seasons was the creator, co-producer and host of public television's popular Barbecue America cooking series, also created and hosted Ready, Aim...Grill on the Outdoor Channel, and most recently was tabbed as Editor-in-Chief of Barbecue America Magazine. Have made multiple TV appearances on major network TV shows including Regis & Kelly, The Today Show, Good Morning America, and Fox Friends to promote the various cookbooks I have authored. Some of my recipes have won various internet contests but this will be my first head-to-head cooking competition, and I can hardly wait to put on the apron, grab my whisk and spatula, and get cookin'.
As one of only 23 people in the country to have been awarded a PhB (Doctor of Barbecue Philosophy) for my work, support and passion for the nation's barbecue industry and competitions, I am stepping away from barbecueing and grilling pork, beef, lamb and poultry to explore the world of pies, cakes, soufflés and cookies - but since I can't stray far from my comfort zone and roots, more than likely use a bbq grill for most all of my dessert recipes.