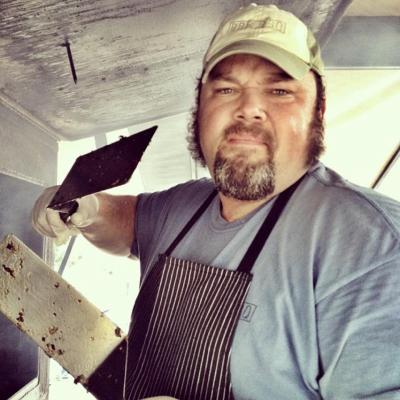 I grew up in Brooklyn New York. After high school Ken attended Oklahoma State University, where I received a Bachelor’s degree in Hotel and Restaurant Administration. Next I attended The Culinary Institute of America. While at The CIA he did his externship at The Greenbrier Resort in White Sulphur Springs WV. During his externship Ken was accepted into The Greenbrier’s Culinary Apprenticeship program. Near the end of his senior year of the apprenticeship, he started competing in BBQ contests in the Mid Atlantic Region. At this time Hoss's BBQ & Catering Company was formed. This was the side business I created to cater BBQ events and do consulting work. I was eventually promoted to the position of Catering Chef at The Greenbrier. While working as the Catering Chef he was able to work with Chris Lilly, Ray Lampe, and Myron Mixon during the BBQ Mastery classes taught at the resort. After working on the BBQ Mastery classes Chris, approached me about working for Big Bob Gibson Bar-B-Q, in Decatur Alabama. My role as a manager of Big Bob Gibson’s is to help manage the day to day operations of the restaurants. Often traveling with Chris to different competitions, and other culinary events, such as The Big Apple Block Party, The Bob Hope Classic, Memphis In May World Championships, The Jack Daniels World BBQ Championship, South Beach Food & Wine Festival, Atlanta Food & Wine Festival, and The American Royal in Kansas City.
We have won Two World Championships at Memphis In May during my time on the Big Bob Gibson Team.
I was recently married to my wife Jessica Hess, and we have two daughters, Ali and Maya and are awaiting the birth of our son.