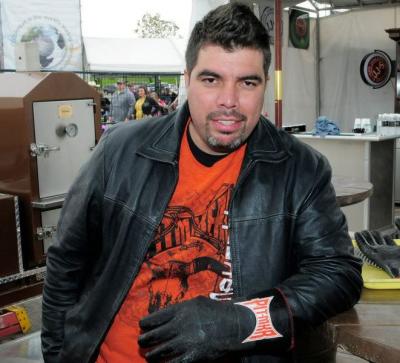 Julio Howard is a second time competitor at the World Food Championship, but is a Veteran competitive BBQ Cook, with over 12 years on the cooking circuit. Finishing consistently in the top ten categories at the Houston Livestock Show and Rodeo World Championship BBQ Cook-off, and Grand Champions in many Texas area BBQ Cook-offs, he is looking forward to his 2nd showing at the WFC . Beyond this, Julio is a BBQ engineer at Pitmaker with co-owners George Shore and Victor Howard, who is his brother and current 2013 World Food Champion of the BBQ category.

Julio, Victor, and George regularly compete against each other (and more often together) for research and fun as the primary BBQ Pit designers at their company Pitmaker (www.pitmaker.com). Julio has become infamous this year as saying the only reason his brothers Victor and George won the World BBQ Championship last year, is because he wasn't there to compete against them last year. So we will have a brother vs. brother rivalry going on for the 2014 World Food Championships in BBQ!