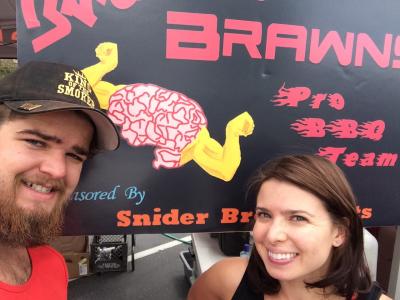 Brains & Brawn's is a Brother Sister Act from Utah with a total of 3 competitions under their belt. Pitmasters, Jake (21) and Rachael (25), journey of smoking bbq began in 2011 when their parents picked up smoking as an empty-nester hobby and would invite one of the four adult children to various competitions with their team, Got Smoke BBQ. Rachael (a masters student) and Jake (soon to have his BA) are working hard at school. Various out-of state competitions are not so compatible with student obligations or the college-budget friendly. In response to school-life limiting their bbq experience, Jake and Rachael began their own team in which they could more easily find the time and plan to go to comps. that would work with their schedules.
The siblings are 6th generation butchers and they can be found working at the Snider Bros. Meats alongside their dad during the summer months. The progression to smoking was a natural one for the two and they feel that having knowledge of the rare product gives them an edge. It also helps to have the genes of a super-taster, thanks mom.
"Our family has always appreciated good food and understands the idea of quality, you are going to get out what you put in. So we start of with a good piece of meat, add some seasoning, maybe some sauce here and there, but most of all we add a lot of fun. If your too stressed out thats just gonna throw you. We compete together as a team, if we are lucky we get one of our other family members to join in the fun. Don't get me wrong, we like to win, but at the end of the day, for me at least, its how we come together to turn in 4 products that we are proud of and to spend time together. We compete with heart and that is what makes us different" -Rachael
"Butchers know their meat better"- Jake, Head Cook and the comedian of the team