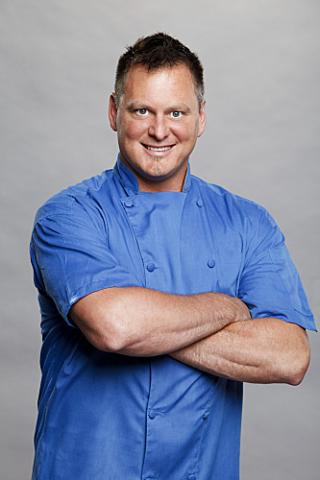 CHEFJOE
As a celebrity Chef on Food Network's Cutthroat Kitchen and CBS's Big Brother 14 reality T.V. show, Chef Joe served up some of his loud and colorful style of cooking for the house guests. Chef Joe recently competed on the Food Network show Cutthroat Kitchen. Airing during the Holidays. Chef Joe travels the country as Corporate Chef and Brand ambassador for Blodgett Ovens.
“My style is anything goes,” says Joe Arvin. He has just released his first cookbook MADLOVE COOKING! Look for Joe speaking on food across the country.He is available for cooking demonstrations and seminars at food shows and Corporate events.
Cooking is Joe’s true passion in life and it shows on stage and in his demonstration cooking.


His interest in cooking developed in early childhood. At the age of 12, he was whipping up eggs and pancakes for his parents' breakfast and as well known among friends and family for the "world's best tacos."

At the age of 22, Joe came face to face with destiny. He worked for a local caterer, The Pampered Chef, in Lexington, Kentucky. Chef/Owner David Larson was a winner of the James Beard Award, among other accomplishments. Working beside the talented Larson, Joe decided he would pursue the culinary arts as his long life career. Together they created some of the finest weddings held in state of Kentucky.

Chef Joe spent much of his time in various restaurants, hotels and catering facilities acquiring knowledge and learning the art of presentation before attending Baltimore International Culinary Collage, where he graduated in 1996. He then served an externship at Mohonk Mountain House, New Paltz, New York, and at Harbor Court Hotel, Baltimore, where he trained under Chef Holly Forbes.

Joe has combined his professional culinary background with a strong flair for public relations and highly developed communication skills. "I use people's eyes and palate as my canvas" says Joe.